I describe in detail my “Rain Man style” technique for language learning in my sophomore book, Two Bucks to Timbuktu. One of the programs I use (mostly for learning nouns, verbs, and very basic sentence structure) is Duolingo. It’s a great app (for both iOS and Android) as well as an (arguably even better) excellent browser application. Today we’re going to learn an easy “hack” to improving Duolingo’s effectiveness even more by reversing a language tree.

First, if you’re not familiar with exactly how Duolingo works, I’ll give a short explanation. Each language, say Spanish in this example, has a “language tree” with 25 individual lessons. These 25 lessons represent a wide range of categories and difficulty, and completing all 25 of them is called “completing a tree.” Each time you complete a lesson, its icon will turn gold. It takes a long time to complete an entire tree, usually a year or more if you practice at least 15-30 minutes each day. 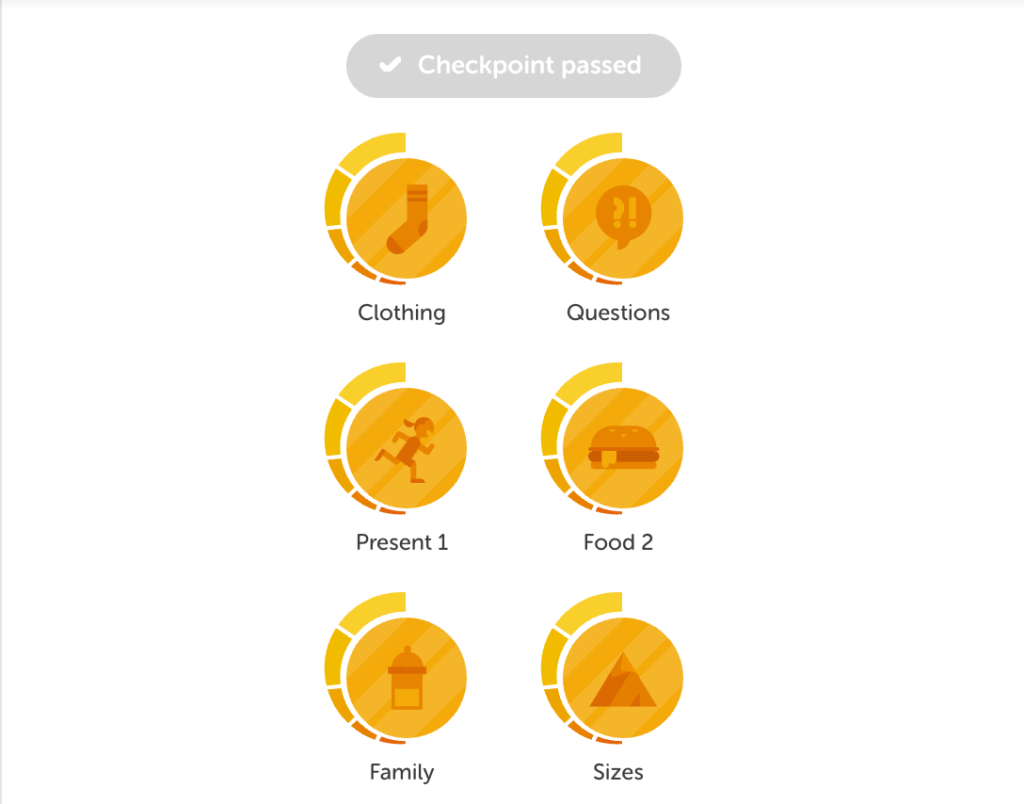 If you go a week or so without practicing a lesson you’ve already completed, it loses its gold status, and you have to brush-up and do a quick practice or two within that lesson to regain gold status on it. As you could imagine, this can get frustrating when you’re desperately trying to complete all the lessons, but it’s a good thing! This forces us to keep practicing words until they are firmly committed to memory.

Duolingo is a program I would consider a staple of any wordivore’s diet. As you would find in my aforementioned book, it’s both efficiency and an eclectic docket of softwares and techniques that teach a language fastest.

One issue I’ve found with Duolingo, however, is that it has a somewhat one-sided approach. Or at least that’s how it seems to me. For example: When learning new phrases, you are almost always asked to type your answer in English, or select a photo with English text, etc.

In other words, you are overwhelmingly seeing a Spanish word or phrase and trying to recall (or guess) the English translation of it. This is great for reading or listening to a Spanish word and translating it, or learning a word for the first time, but what happens when the tables are turned and you’re trying to speak or write to someone? I find I can more easily look at a given Spanish word and think “okay, in English that’s ____”, partially because many Spanish words are so similar to their English counterparts (easily guessed, such as autor for author or artista for author), but if you ask me “what’s the Spanish word for ____”, it’s a little more difficult for me because I’m essentially pulling it out of thin air if I don’t remember the translation.

Put in simpler terms, it’s easier to look at the word profesor and guess that it’s probably the Spanish word for professor than it is to see the word professor and recall the translation if you don’t have it memorized, because this way around you don’t know if it’s an almost identical or similar word in spanish, or if it’s one of those translations that leaves you spinning in confusion, like zanahorias, the spanish word for carrots. (Holy hell!)

Fortunately, there is an answer to this problem and it’s actually fairly simple! It’s called “reversing a tree” and it’s a sort-of life hack that Duolingo users have come up with on their own.

Basically, all you do is switch your language—and I’m referring here to the actual language that Duolingo thinks you speak natively, which in our case is currently English—to your target language (in our case, Spanish). Then, you take English lessons. So basically—you guessed it—you’re doing the exact same lessons reversed. I found that this was surprisingly harder. I began with the earliest lessons which I could breeze through in seconds regularly and found that I had to take a moment and think about what to type when the language tree was reversed, not to mention the entire app’s language was then in Spanish!

When a language is reversed, you’re actually typing out your answers in the target language more frequently so you learn proper spelling and punctuation more quickly and effectively (and more importantly, how to form proper sentence structure and a deeper comprehension/memorization of each Spanish word), while the traditional forward manner teaches reading, listening, and speaking more effectively. As with all of our other language-hacks, a combination of these different techniques gives us greater value.

Because it’s considerably harder, always reverse a tree after you’ve completed its forward counterpart. The normal lessons are where you’ll learn new words (for the same reasons you should reverse them later, as I mentioned above—it’s way easier to learn a word you are more unfamiliar with or a new word). Reversing a tree is our way of testing or reinforcing to make sure what we’ve learned has been fully committed to memory.

Perusing the Duolingo forums where I learned about the language tree reversal technique, the general consensus was that it’s better to do this as you learn a language rather than completing your entire tree and then reversing it. In other words, complete 2-4 lessons and then reverse them. I would have to agree, as I’m currently beginning reversal after I’ve already completed most of my regular Spanish tree and it’s proving quite difficult in some areas!

I will also recommend turning off the “voice” features when reversing a language, as you’ll just be speaking in English which can get boring rather quickly.

So if we are to apply our general time-management techniques of language learning (remember efficiency, such as doing audio lessons in the shower), I would recommend dayparting these lessons. For example, doing your traditional lesson in the morning and reversing it in the evening to test what you’ve learned. I’ve been using Duolingo in my web browser instead of the app lately, as I’ve found I can type faster and thus cram more learning into a given timeframe. I also do this so I can keep a note-taking app open (I use Evernote for Mac) and type any new words and their translation so I can study or refer to them later if needed.

Do you have any tips or insights into improving or expanding on this technique? Leave them in the comments below!